In this post, Taras Savytski, tells us about the quite young, but perspective mobile operating system Ubuntu Touch, what he likes about it's design philosophy and why he designs for Ubuntu Touch. Taras is also sharing his Sketch GUI Kit with the community to help your workflow and inspire you to design for Ubuntu. 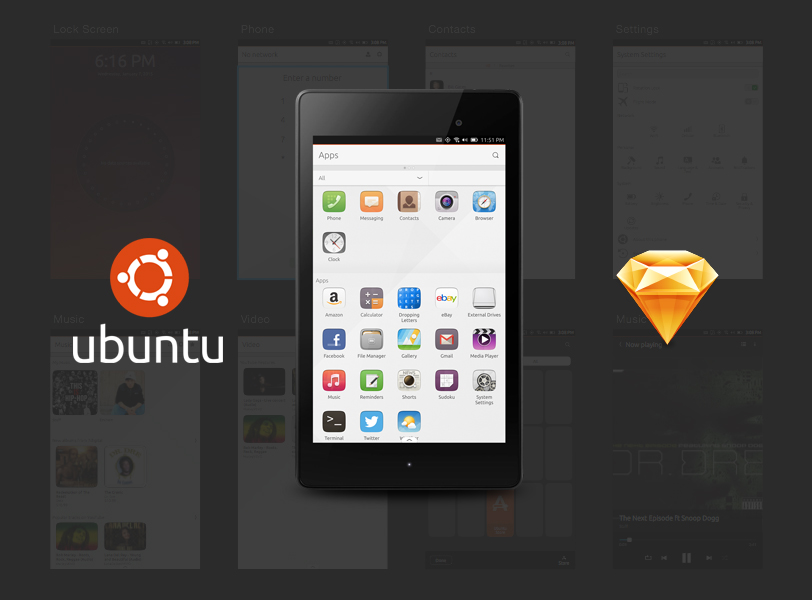 Ubuntu is developed by Canonical, which was established on March 5, 2004 by South African entrepreneur Mark Shuttleworth. The company has developed products such as: Ubuntu, Ubuntu Touch, Ubuntu One, Unity and many others. Ubuntu is a free operating system, developed and maintained by Canonical with the active participation of the open source community.

The history of Ubuntu OS began on October 20, 2004, with codename of the first release - Warty Warthog, as an offshoot of another distro Linux - Debian. Since its inception, 22 versions of Ubuntu OS have been released.

At the moment, Ubuntu has been entering our lives more and more. It is already actively being used in different spheres: personal computers, web-servers, TV, phones, tablets, cars and many others. For example, early last year, many found out that the car Tesla Model S uses a modified version of Ubuntu. Its safe to say that Ubuntu is gaining its momentum not only among techies, but among ordinary users. According to the site Distrowatch.com in 2014 Ubuntu was the second most popular open source operating system in the world.

Now let's focus our attention on the new development - Ubuntu Touch OS. Ubuntu Touch was presented at the Consumer Electronics Show in January, 2013, but the first version for partners and developers was released in October. In the beginning it was only available for Nexus devices: Nexus 4, Nexus 7, Nexus 10, Galaxy Nexus. Some craftsmen have ported it to other Android devices. The first version of the system was very unstable and not suitable for everyday use. The system didn’t have the basic minimum standard applications, and those applications that were there - didn't work very well.

Ubuntu Touch is based on Ubuntu Linux, the platform supports i386 and ARM, and uses modular kernel Linux. The system interface is based on Qt and QML. Programs can be developed not only with the help of Qt, you can also use HTML5 and tightly integrate the programs interface with the system.

At this stage, the system is very difficult to compare with iOS or Android as it's still at an early stage of development. Ubuntu Touch doesn't have a large number of users, and until recently, it didn't even have a phone which was pre-installed with the system.

However, the company BQ together with Canonical just recently released phones running Ubuntu Touch - BQ Aquaris E4.5, BQ Aquaris E5 HD, and the Meizu MX4 Ubuntu Edition. This is the first phone which has an installed system from Canonical. The phone works pretty stable and has the average characteristics. 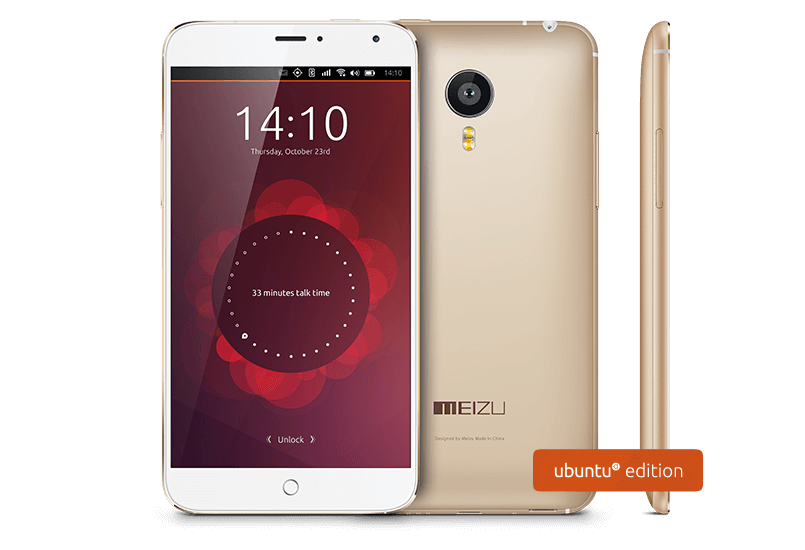 There is also an Ubuntu Software Center, but it has very poor set of applications. One of the few apps which I can highlight is - Telegram. This is a great application created in accordance with all system guidelines, unlike other applications in the Ubuntu Software Center. Ubuntu Touch has a very interesting system of gestures. You don't need to press any buttons. For example, to go to the task manager and see all running applications, it's sufficient to swipe on the screen from right to left. The system also has a very good typography and can safely compete with market leaders - iOS and Android. The system uses the Ubuntu Font which was developed by the company back in 2010 together with Dalton Maag.

When Ubuntu Touch was released, I was very interested in it. I like many open source products, although many of them have horrible designs. Unlike desktop version, Ubuntu Touch from the outset had an attractive design but without consistency on guidelines.

I used my Nexus 7 (2013) and install the latest version of Ubuntu Touch in order to fully explore the system. When I examined the system thoroughly, I began to read guidelines and lots of  information on the internet. All this information has helped me create the Ubuntu GUI Kit. We all need to constantly improve our skills and if someone decides to download this GUI Kit and be inspired to create a beautiful product or just learn something new, I'll be very happy. I postponed the release of the GUI Kit, several times, because Canonical released new versions of the system and radically changed the design of some applications.

As stated in the documentation for Ubuntu Touch - it's designed according to the Japanese philosophy called - Suru, which translated from Japanese means a crane. The most important difference from majority of the systems is that they are based on grid-based systems and in Ubuntu elements can break out of the grid. The basic principles on which Ubuntu Touch is built are: rhythm, naturalness, tidiness and cleanliness. I'm very impressed with this philosophy of design which is based on natural gestures and content position. The system has very good combination of the use of light and shadow which reminds me of Material Design. I believe that every designer should pay attention to this OS and try to create some concepts.  I have a few application concepts for Ubuntu Touch - one of which is a Clock. 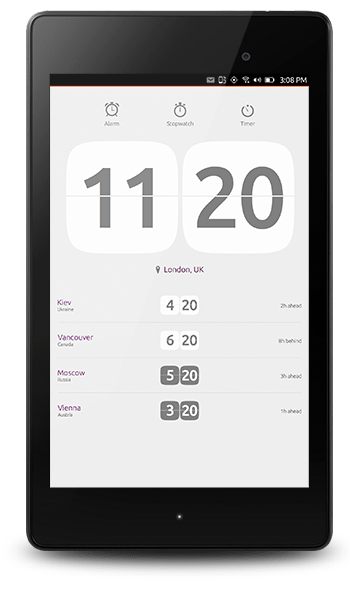 Let’s focus on designing Ubuntu Touch applications. Positioning blocks  - classical. First comes the Notification Bar which comprises the battery status, time and date, gps, notification, wifi, and sound. If you open the Notification Bar, it will remind you of Android 4.4 . They have a lot in common.

Next, the Header is where the Navigation Drawer, Title, View, Actions, Actions Drawer, Search, and Settings are.
Some gestures may remind you of iOS. One swipes from left to right, to remove content and from right to left for extra action. Also to gain access to additional functionality of the application is enough to make you swipe from the bottom up. In standard applications, this function is present in the Clock.
To exit the application, or get fast access to other apps it's enough to swipe from left to right and and a left sidebar with applications and access to the home screen will appear. It's very convenient because you can immediately start another app without leaving the application. 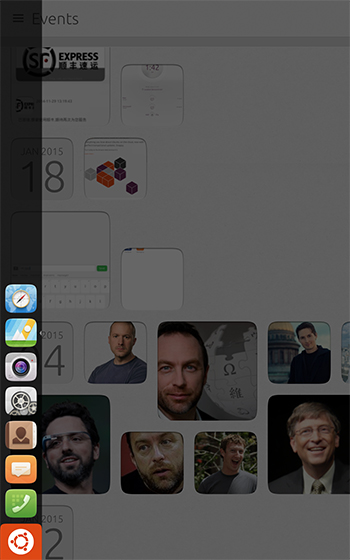 Ubuntu Touch brings its own flavor through the Scopes they promote in the desktop version of Ubuntu. Scopes are additional screens where you see content (similarly of desktop), such as YouTube, eBay, Reddit, and Amazon. 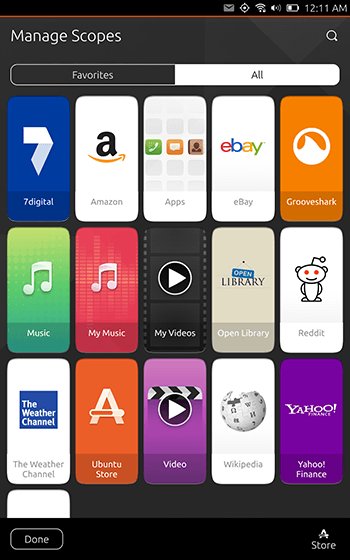 There is a very interesting solution for the progress bar in Ubuntu Software Center - when you click on the download button - it immediately transformes into a Progress Bar. It's pretty good user experience.

The system uses a very pleasant color palette, the main colors are orange, purple and gray. The colors combine well and don’t strain your eyes. There is practically no transparency or blur. Ubuntu Touch has a good iconography, but application icons still use skeuomorphism. It looks a bit strange, because the whole interface is flat.

To sum up this brief overview, I can confidently say that Ubuntu Touch is moving in the right direction. But nothing good will happen if application developers will not be invited. The system is doomed to "death" without a good set of high-quality applications. Only in this way a smartphone can be of interest to the users with Ubuntu Touch.